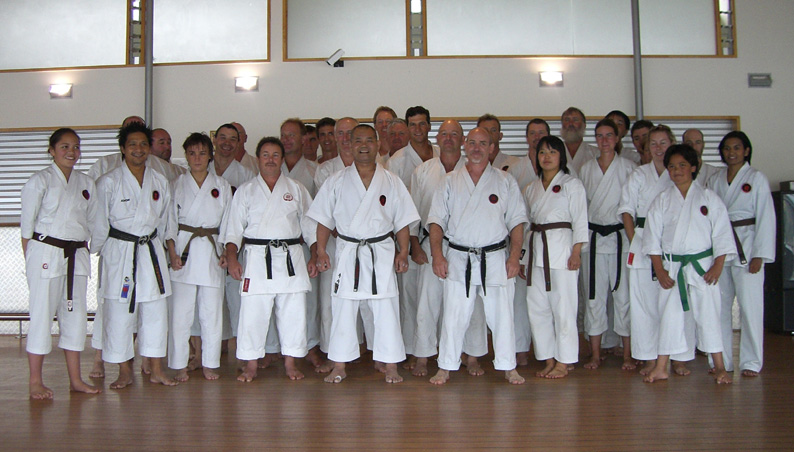 Goju Ryu karateka have been enjoying a bounty of world-class instruction recently; over the last 18 months we have had the benefit of visits by the top three ranked IOGKF instructors: Sensei Morio Higaonna (10th Dan) from Okinawa, Sensei Bakkies Laubscher (8th Dan) from South Africa, and now Sensei Kazuo Terauchi (8th Dan) from Japan. The South Island Gasshuku was held over the first three days of March in some unseasonably wet and cold conditions – not that the approximately 70 attendees from around the country had much time or inclination to lounge around outside; they were there to train… and train they did.

Sensei Terauchi has a fearsome reputation, firstly as one of the hard men of Goju Ryu, renowned for an uncompromisingly tough fighting style that saw him once hold an All Japan Kumite title, but also for his legendary sweat sessions that have seen supremely fit dan grades unable to emerge from their beds for a second day of training. Little wonder then that throughout the New Zealand organisation there was much trepidation, and even more preparatory fitness training, ahead of his first ever visit to our country.

Pre-gasshuku training started in Ranfurly with the official opening of the Gimmerburn Dojo built by Tony Clarke. This exquisite little dojo sits on the Clarke farm and is complete with weights gym, sauna, and one of the smoothest sprung wooden floors around. During his visit in Wellington in 2007 Sensei Higaonna bestowed the name Bu Shin Kan on the fledgling dojo – translated roughly as “the place where body and mind come together”. Well, the session that Sensei Terauchi presided over at the dojo’s official opening seemed more designed to separate mind and body. About 25 karateka of all grades crowded into the tiny training area and, after a brief demonstration of kata by the black belts present, a fast and hard 40 minutes of moving basics had everyone wishing Tony had put more windows in. The opening ended with Sensei Terauchi performing one of the most powerful displays of the kata Seisan ever seen by the gathered audience. In time-honoured fashion the beers were broken out and the dojo was saluted with a welcome drink.

The next day the action moved to a wet Dunedin where Sensei Terauchi was formally welcomed into the training venue with a Maori challenge. The martial intensity of this challenge set the scene for three days of effort and instruction. Each day started with dan grade sessions for the first hour or two, before general sessions began – some five hours of training in all each day. It soon became apparent that you’d better get to the dojo early to start your own warm ups because Sensei Terauchi’s formal warm ups are brief – to put it mildly. Then it’s straight into basics – standing, moving, multiple combinations, always with speed and power, but never sacrificing good form. Limbs ached and sweat stung the eyes, but there was little time to catch your breath. Sensei’s eyes were everywhere and he quickly spotted fundamental flaws in the apparently polished techniques of even the most senior dan grades. His unbelieving cry of “Why?”, when he saw some questionable move, and his readiness to laugh at less than impressive efforts, combined with his own flawless technique and incredible speed, provided a huge incentive to try harder.

While our concerns over the likely severity of training were well founded, and our preparations warranted, all present were deeply impressed by the amount of technical information Sensei Terauchi was willing to impart. He was extremely precise in his instruction for the performance of the Goju Ryu kata, finding this the main area of weakness within the NZ organisation. He acknowledged that there is a temptation to concentrate on kumite and let your kata practise wait for grading preparations, in fact he admitted that for many years he trained only for kumite and brushed up his kata only the night before a grading. However, a while back he spent four years training exclusively and intensively with Sensei Higaonna and, not surprisingly, had his eyes opened to the fundamental importance of the kata as the underpinning to the Goju Ryu Karate-Do. For three days he drilled our kata, working his way from Gekisai Dai Ichi, through to Seisan, with special attention to the breathing kata Sanchin and Tencho – our performance of which made him remark that clearly we had not been practising them.

The afternoon of day two was set aside for a black belt grading and seven brave karateka put themselves forward for some “extra training” under his scrutiny. All were successful and the IOGKF NZ is now enriched by six new Shodans and a Sandan; the candidates were in turn enriched by the unique experience of having graded under the awesome Sensei Terauchi.

Special thanks go to Joe Tait for accompanying Sensei Terauchi out from Japan – always a pleasure to have Joe back in the country for a while. Joe, Craig McLachlan from Queenstown, and Dean Johnston (another kiwi over from Japan) helped with the translation of technical information – although a scowl, a laugh, or a grunt from Sensei Terauchi carries all the information you need at times. Thanks are also due to Tony Clarke for overseeing the logistics of the whole event, and of course many thanks to all participants – these events are to benefit the whole organisation and will stand or fall on people’s willingness to support them. The South Islanders are very grateful for the support shown by North Island clubs – it was a real pleasure to welcome you to the sunny south and to have had the honour to shed some sweat with you.