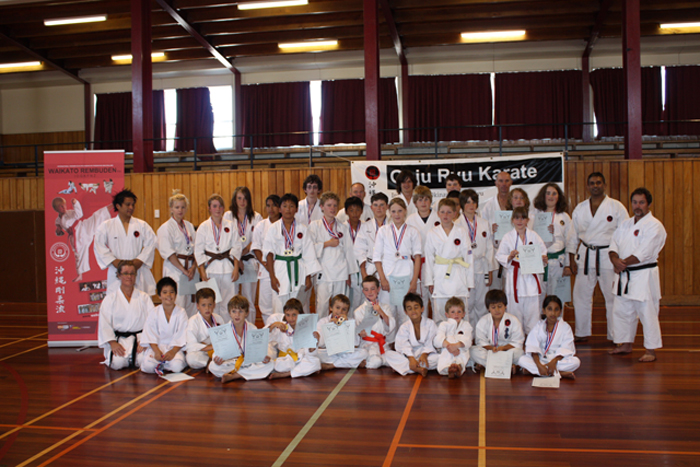 The 2010 IOGKFNZ National Youth Gasshuku and Tournament was held in Turangi on March 6-7. The following is a report from one of the many kids who attended…

My name is Christopher, and I belong to the Waikato Goju Ryu karate club. I will tell you about the youth camp I attended at Turangi in March 2010.

My mum and I got out of the car. The karate camp! I was excited about the event for weeks, mainly because it occurred on the same day as my birthday. We checked in to the motel, Club Habitat. I had a little play on the playground. And then we ate lunch underneath a tree. Before long, I was already in my karate uniform in the hall down the road. Everyone was chattering excitedly, meeting up with old friends, and finding new ones. The kids got excited at the sight of the brand new karate mats, from my dojo. I could smell the fresh rubbery smell of the mats. I was looked forward to the training, and doing takedowns on the mats.

The Senseis allocated the top-left corner for me, and we began basics. It was actually quite fun learning from other Senseis, and getting to buddy up with the people from other clubs around me. Next, I did kata training. I got put into a small group who were at the same belt level as me. We applied the Seiyunchin kata to a bit of sparring. What we came up with was fantastic. I wasn’t too sure about the mums, because Sensei Rajesh gently persuaded them to let the juniors teach them the kata. Through the corner of my eye, I saw a couple of adults bolt out the door.

The highlight of my camp was what came next. A Sensei from Hawkes’ Bay was going to give us a weapon demonstration. I tried to contain my excitement, because I had never seen this art before. The eyes of every single person in the hall were glued on him as he peforrmed his weapon kata. I was intrigued as I stared at the weapons that resembled a short, blunt sword with a bump on the bottom, which was nothing like the swords you see on Legend of the Seeker. He flipped the weapons out a few times, which was awesome to watch.

Our final session of the day was with Sensei Binh. He taught us how to score in kumite properly, and gave us some good tips. I wish more parents from our dojo were there when he explained the scoring system, because most of the parents thought that to score points in kumite, you punch or kick anywhere, which is far from the truth.

By 4pm, everyone lost concentration, and luckily, we finished at that time. To relax, some children played rugby, others stayed around the playground, and some kids hung around the fish pond tormenting the goldfish. You could hear some parents yelling at the top of their voice in the direction of the fish pond, to stop their children from fishing in the fish pond. Dinner was as welcome sight when it came. We were so famished. The meal was fantastic, made by Maria from Hawkes’ Bay. For dessert, we ate ice cream and banana or chocolate cakes. Then I got a big surprise. My mum bought out a birthday cake covered with lollies and everyone sung Happy Birthday to me. Everyone cheered at the mention of even more food.

Finally, we had a quick quiz. We were organized into teams, and it was really fun to work with people from other dojos. In between the karate orientated questions, people had fits of laughter because of how ridiculous and funny the questions were. By nine-thirty, everyone retired to their cabins for the night. We had had a very long day.

The next morning, at 7:15 am, some people were having breakfast, while others slept in. After breakfast, we quickly put on our gi. Before long we were back in the dojo with the mats out. We had a quick tournament training session, and then we began with the tournaments. We had two tournament sessions going at the same time, one for the older kids, one for the younger kids. It was great to observe what method other dojos used. My division for kata didn’t have too many people in it. It’s fun to compete against people in other dojos. Then, we did kumite. I competed against somebody in another dojo, a friend I made during the first day at camp.

The next thing I knew, everything was over, and there was a medal ceremony and a photo session. Then we had lunch provided for us, before leaving for Hamilton.

I’d like to thank all the people who organised this youth camp, and all the Senseis that imparted their knowledge to us, so we can continue to learn and grow.