We hired a car and set off to Narrabeen (generally a 45 minute drive north). Ben thought the ‘lady’ in the Tom-Tom had Tourettes Syndrome as we had trouble understanding what she was saying because of her accent.

Sensei Bakkies training was great. I didn’t imagine you could have so many combinations of a jodan age uke, jodan zuki, mae geri, and a ura zuki. By the end of the weekend I didn’t know my right from my left! Sensei Bakkies was very generous with his time and knowledge.

There were 37 attending the Gasshuku of which 24 were Shodan and above.

The hospitality of our Australian hosts was amazing. We were made to feel very welcome (even if the Warratahs did beat the Crusaders!)

Everyone stayed and ate together. It was great to be able to talk to people in the informal environment of the dining room. I learned a lot about different training techniques for juniors (which make up the bulk of our students in C.H.B.)

We came home tired, stiff and a little bruised (which is as it should be). Hopefully between the four of us we can remember a small portion of the techniques we learned at the Gasshuku.

Many thanks for the money we received from the travel fund. I am sure we will be able to ‘pay it forward’. 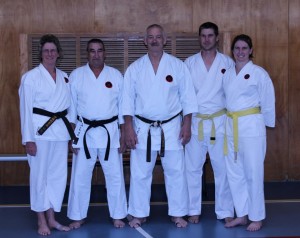